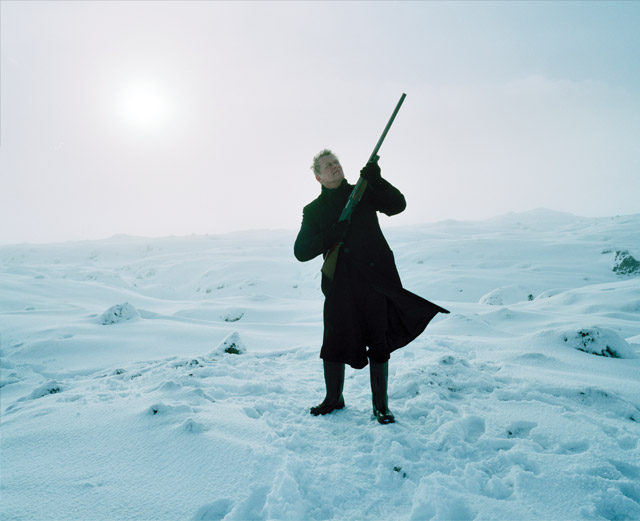 For four days only, Crawford Art Gallery and the Sounds from a Safe Harbour Festival present a collaboration with internationally renowned Icelandic artist, Ragnar Kjartansson, from Thursday 14 - Monday 18 September.
The short film, Guilt Trip, shows a man dressed in black carrying a bright yellow shopping bag full of gun cartridges, trudging through a sublime frozen landscape. At regular intervals, the figure rummages through the bag, loads and nonchalantly fires the gun, at a non-disclosed target. Kjartansson’s figure is a personal tragicomic portrait of defeat and defiance, in conflict with earth’s most unforgiving environment. Filmed in surround sound, the searing sounds of the gun discharging and the eerie beauty of the glacial landscape create a beguiling viewer experience.

Kjartansson engages multiple artistic mediums throughout his performative practice. The artist’s work incorporates the history of film, music, visual culture, and literature. His works are connected through their pathos and humour, with each deeply influenced by the comedy and tragedy of classical theatre. Kjartansson's use of durational, repetitive performance to harness collective emotion is a hallmark of his practice and recurs throughout his work.

Guilt Trip, follows on from the screening, A Whole Lot of Sorrow, by Ragnar Kjartansson at the Crawford Art Gallery in partnership with Sounds from a Safe Harbour Festival in September 2015.

Kjartansson (b. 1976) lives and works in Reykjavík. The artist has had solo exhibitions at the Reykjavík Art Museum, the Barbican Centre, London, the Hirshhorn Museum and Sculpture Park, Washington D.C., the Musée d'art contemporain de Montréal, the Palais de Tokyo, Paris, the New Museum, New York, the Migros Museum für Gegenwartskunst, Zurich, the Fondazione Sandretto Re Rebaudengo, Turin, the Frankfurter Kunstverein, and the BAWAG Contemporary, Vienna.  Kjartansson participated in The Encyclopaedic Palace at the Venice Biennale in 2013, Manifesta 10 in St. Petersburg, Russia in 2014, and he represented Iceland at the 2009 Venice Biennale. The artist is the recipient of the 2015 Artes Mundi’s Derek Williams Trust Purchase Award, and Performa’s 2011 Malcolm McLaren Award.