Mark Clare I Believe In You 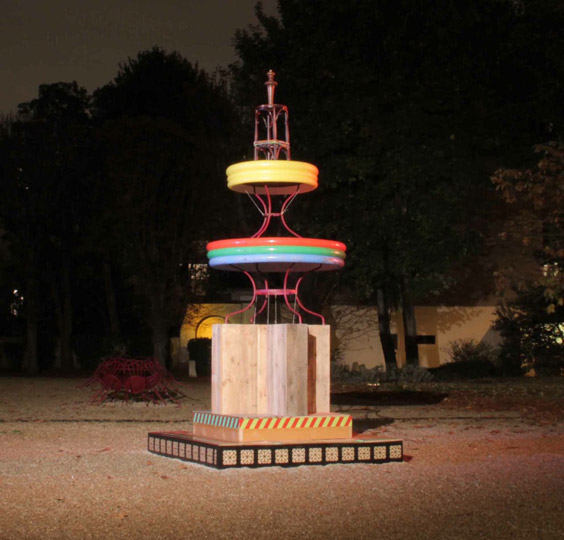 Crawford Art Gallery presents a major solo exhibition of Mark Clare. I Believe In You offers new insights into the work of Mark Clare, who, in his role as a creative public agent, seeks to engage with and highlight unresolved incongruities within our societies, placing scrutiny on the combative issues of globalization, individualism and public space.

The exhibition takes its title from one of three works created specifically for the Crawford Art Gallery, and features a number of key works from the last five years of Mark Clare's practice. The large-scale installation I Believe in You, designed to follow the gallery's high arched ceiling, explores notions of society's perceived disaffection with political engagement, and our complex relationships with public institutions.

Mark Clare’s necessity to make, to construct and to create a dialectic framework to reflect upon structures or scenes that make us think about how social space is organised, is a sustained feature of Clare’s practice. Clare uses his mobile, multiple forms of art to assist in imagining how our expectations of public space — whether as physical location or as an idea of collective belonging — might also be freed from present orthodoxies and hierarchies, just as they also become newly informed by under-acknowledged histories. He is not so much a detractor of ideologies but a commentator on its fallibility - illustrated in the video Quickness (2014) which alludes to the anxiety of projected failure in an attempt to capture society's fraught relationship with speed that is endemic.

Similarly, MonoCulture (2014), an ambitious modular sculpture/installation structured in the form of interconnected commercial beehives, emphasises our ecological vulnerability. The current decline of bees within the environment becomes a symbol for the larger picture environmentally, politically and socially. In reference to both environmental ethics and environmental justice, Kant once stated that “the greater or lesser social interactions among the nations of the earth, which have been constantly increasing everywhere, have now spread so far that a violation of rights in one part of the earth is felt everywhere.” This is reflected in the Kyoto protocol* and the international trading of emissions. Such forms of collective bargaining by nations on the future are issues that are pervasive throughout Clare’s practice**.

Mark Clare's work is habitually layered with intersecting micro and macro perspectives. In agitating the viewer’s social conscience, Clare deftly diffuses and heightens these tensions with humour and spectacle yet the work is also subtle and nuanced, offering the viewer pathways to reflect and engage in scrutinizing cultural misnomers.

The exhibition Mark Clare: I Believe in You is made possible with the generous support of the National Sculpture Factory, and Guesthouse, Cork.