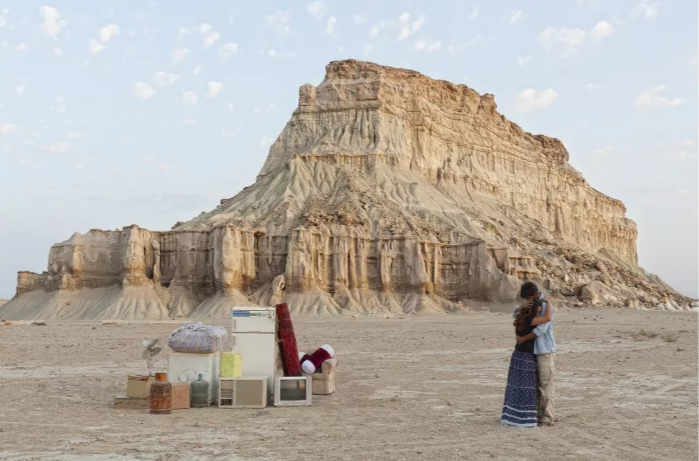 Curated by Peggy Sue Amison (IE/USA) and in partnership with Stadtgalerie Saarbrücken, Germany, In Transit powerfully illustrates the physical and psychological challenges faced when fleeing from unsafe or economically depressed homelands, towards dreams of a more secure future and looks at the deeper discussion of what constitutes citizenship in the wake of the enormous migrations into Europe.

Through their narratives, the artists strive to disrupt accepted misconceptions about immigration and otherness in order to tell a more accurate story. By collaborating with their subjects they give voice to those who must endure mountains of dead time - filled with boredom, sadness, fear, and apathy - while tangled up in bureaucracy in order to become more than merely ‘registered aliens’ or ‘tolerated’ people. The photography and video works in this exhibition are created in Germany, Jordan, Lebanon, Italy, and Iran, and are testimonies to day-to-day survival alongside the struggle to find a sense of normalcy, stability, and a place to call home.

Tanya Habjouqa (JO) is an award-winning photographer, journalist and educator. Her practice links social documentary, collaborative portraiture, and participant observation. Her principal interests include gender, representations of otherness, dispossession and human rights, with a particular concern for the ever-shifting sociopolitical dynamics in the Middle East. Habjouqa’s work has been exhibited worldwide and is in the collections of MFA Boston, Institut du Monde Arab, and the Carnegie Museum of Art. She is a founding member of Rawiya, the first all-female photography collective from the Middle East. She is also one of four mentors for the Arab Documentary Photography Program, organized by Magnum Foundation, Prince Claus Foundation, and AFAC. She is a member of the Noor Agency and represented by East Wing Gallery. Habjouqa lives with her family in East Jerusalem.

Gohar Dashti (IR) received her MA in Photography from the Fine Art University of Tehran in 2005. After studying photography in Iran, she has spent the last 13 years focusing her practice on social issues with particular references to history and culture through a convergence of interests in anthropology and sociology. Her practice continuously develops from life events and connection between the personal and the universal, the political and the fantasized. Her work has been exhibited around the world and is in collections including the Victoria & Albert Museum (UK), Mori Art Museum, Tokyo (JP), Museum of Fine Arts Boston (USA), Nelson-Atkins Museum of Art Kansas City (USA), National Gallery of Art, Washington DC (USA), Museum of Contemporary Photography (MoCP), Chicago (USA), and Kadist Art Foundation, Paris (FR). Dashti presently lives with her family between Iran and the United States.

George Awde (USA/LB) was born in Boston of Lebanese origin. Drawn to alternative narratives, his work delves into issues surrounding citizenship, nationality and sexuality, focusing on people living on the margins of the city and their parallel realities between life in Beirut and elsewhere. He graduated with an MFA in Photography from Yale University in 2009 and holds a BA in painting from Massachusetts College of the Arts, Boston. Awde presently lives between Doha, Qatar; Beirut, Lebanon; and Cairo, Egypt. He is represented by East Wing Gallery and teaches at Virginia Commonwealth University in Doha, Qatar, and is also co-founder and co-director of marra.tein residency program in Beirut.

Daniel Castro Garcia (UK) was born and raised in Oxford, England, by parents who emigrated from Spain’s Galicia region seeking economic opportunities. As the son of immigrants, Castro Garcia wanted to use his work as a photographer and filmmaker to help migrants/refugees have their voices heard. Since May 2015, he has revisited many of Europe’s refugee/migrant hotspots. The book, Foreigner: Migration into Europe 2015 – 2016 was self-published in 2016, with graphic designer Thomas Saxby and producer Jade Morris. In 2017 Castro Garcia received the British Journal of Photography’s International Photography Award and selected as a grantee by the Magnum Foundation Fund. He was also awarded the 2017 W. Eugene Smith Grant in Humanistic Photography. Castro Garcia is represented by East Wing Gallery. He is lives and works in Sicily.

Stefanie Zofia Schulz (DE) was born in Germany and is a graduate of the Ostkreuzschule in Berlin. Her photographic practice focuses on the documentation of important social issues and the human condition. Her work has been exhibited in Festival Circulations (FR) in 2016 and has been published in i-D Magazine, Emerge magazine and Dazed digital. She presently lives and works in Berlin, Germany.
Peggy Sue Amison (US/IE) is Artistic Director for East Wing, a platform for photography founded in Doha, Qatar. As a curator, strategist, mentor, photographic consultant and writer, Amison has collaborated with numerous emerging and established photographers, festivals and publications internationally in Europe, China, the United States, and the United Arab Emirates. She is originally from San Diego, California, and holds a BA in Art from San Francisco State University. Prior to her work with East Wing, she was Artistic Director of Sirius Arts Centre in Cobh County Cork, Ireland from 2001–2014. In Transit was initially exhibited at Gallerie Image, Aarhus, Denmark in 2016.