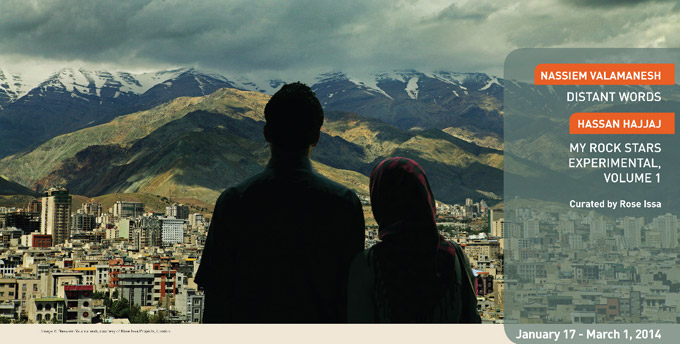 Crawford Art Gallery is delighted to present work by Hassan Hajjaj and Nassiem Valamanesh as part of its ongoing screening series by Irish and international artists. In a new departure, Crawford Art Gallery has invited Rose Issa, a leading expert on contemporary visual art and film from the Arab world and Iran to curate the exhibition. Both Hassan Hajjaj and Nassiem Valamanesh's work explore the interface of living in and between merging cultures paradoxically highlighting alienation and embracing the differences.

Hassan Hajjaj's installationMy Rock Stars Experimental, Volume I is simultaneously a haut-couture street experiment and a revival of African photography from the 1960s and 70s, while celebrating present-day musicians, unsung artists and personal inspirations in the artist's life. The film is part of a series of works which is an on-going examination of belonging in an increasingly globalized society where boundaries of cultural identity – most notably African, Arabic and Western – are constantly changing. Hajjaj, designs the costumes of the musicians and singers using traditional fabrics and found objects which he sources from local markets in his town of birth, Marrakech, and in doing so, bridges the gap between past and present cultures, creating pieces that seamlessly merge folkloric elements into Western contemporary art. Hassan Hajjajlives and works in London and Marrakesh. He has established an international following for his photography and video, and his work features in several prestigious public and private collections worldwide including the Victoria & Albert Museum, London; the Los Angeles Museum of Contemporary Art (LACMA), Los Angeles and Kamel Lazaar Foundation, Tunisia.

Nassiem Valamanesh's work lies between narrative filmmaking and video art and is sustained by bold imagery, soundscapes and a sense of humour mixed with a melancholy that reflects his unique worldview.  Distant Words continues Valamanesh's engagement with themes of longing and loneliness, not for a loved one or a place but for the ability to communicate and speak one’s mind. Valamanesh's film combines animation, text and photography in which the artist conveys his isolation and frustration in his inability to speak the language when travelling through his father’s country, Iran. The film references the loss of language with a seemingly un-diagnosable medical condition and the sometimes gloomy existence of living between cultures.Valalmanesh's films, including titles Little Noel Wants to Fly, My Beijing Friend, Side by Side and Distant Words have been screened widely at film festivals and in 2013 Valamanesh received an award from the Farhang Foundation'a 6th Annual Iranian Short Film Festival at LACMA.

Hassan Hajjaj will talk about his practice alongside a performance by musician Simo Lagnawi who is featured in Hajjaj's film, on Wednesday 19 March at 6pm.