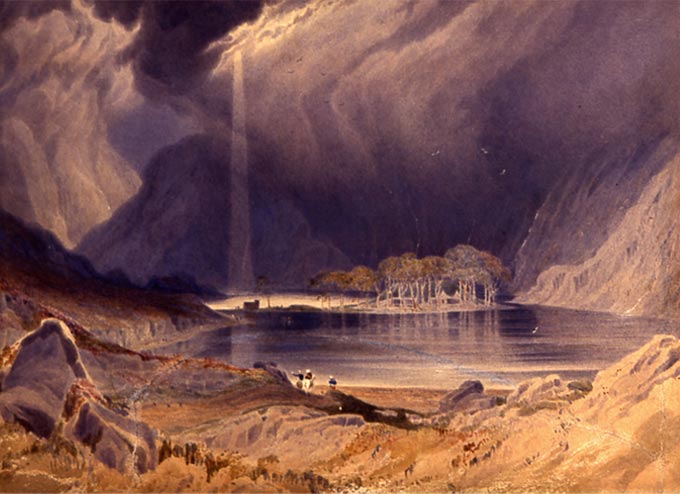 George Petrie: ‘Artist and Antiquarian´ is an exhibition at the Crawford Municipal Art Gallery in which over eighty drawings, watercolours and engravings will be re-evaluated and re-contextualised.

Although George Petrie´s (1790-1866) interests were wide-ranging he is, perhaps, best remembered as ‘the father of Irish archaeology´; engravings of Petrie´s work were used to illustrate guidebooks to Ireland published in the 1802´s, when tourism first became a feature of Irish life and the Irish economy.

Petrie invests his Irish landscape with a strong romantic flavour. Besides attaining considerable reputation as a painter of landscape he devoted much time to the illustration of the antiquities of the country. In 1828, he was appointed to conduct the antiquarian and historical section of the Ordnance Survey of Ireland, and through his work with the Ordnance Survey, the Royal Irish Academy and other bodies, he laid the foundations of modern Irish archaeology. His Essay on Round Towers, for which he received the prize of the Royal Irish Academy, still ranks as a standard work. His topographical drawings and watercolours are an invaluable record of Irish sites and landscapes, such as Clonmacnoise and Glendalough in the early 19th century.

In 1832 he became the editor of the Dublin Penny Journal, a periodical designed to disseminate information among the masses, to which he contributed numerous articles on the history of fine arts in Ireland.

Somewhat of an idealist Petrie believed that through opening people´s eyes - particularly the wealthy and literate middle classes - to the beauties of Ireland, to the wealth of its history and culture, and to the inherent qualities of the native population, that the root cause of social unrest would be swept away and replaced by a new age of high civilisation. Petrie died of fever on January 17th 1866 in Dublin.