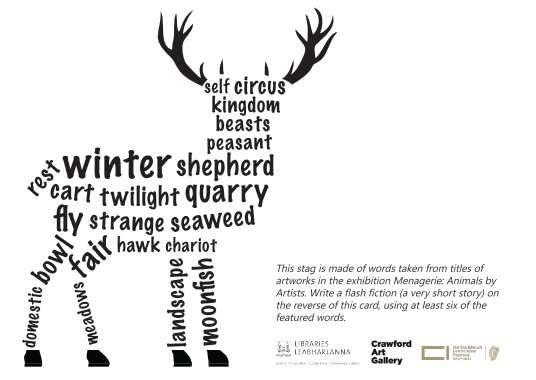 We are delighted to announce the winners of our Flash Fiction challenge in partnership with Cork City Libraries. Cork author Danielle McLaughlin created a playful postcard of writing prompts inspired by the exhibition Menagerie: Animals by Artists in the Crawford Art Gallery.

Danielle McLaughlin’s novel is called The Art Of Falling and it is the chosen book for Cork City Libraries’ One City One Book initiative. It revolves around a fictional sculptor, while artworks inspired by animals thread through her narrative.

A filmed conversation between Danielle and writer Alannah Hopkin on animals in art is freely available to watch from home at
https://crawfordartgallery.ie/once-city-one-book/.

Participants used the prompts to jump-start their own short fiction. The lucky winners won a free signed copy of The Art of Falling, One City One Book choice, 2021.

Below are the lucky winners' entries:

A strange electron at rest got on a chariot at twilight and rode forward in time. Another self-confident positron mounted a hawk and flew backward in time. They met near a meadow and gazed forward to see themselves in each other. Richard Feynman woke up after he had this dream, went to his desk and wrote the equations down.

But to answer your question, Tia, no. I don’t need your duvet. It’s winter. To be fair, you took “cold” literally. I won’t beat you for it. Nothing wrong with being a little literal. It’s a strange old circus. This new city. I can’t find my real reflection in the basin or the bath anymore. My mirror says the most obscene things! This new city. It’s some such other type of “cold” I meant. Don’t worry. I must rest my-self. Take that as literally as you may.

When the winter came, it was cold and dark. A peasant shepherd was finding it hard to feed his family and they were starving. One day the shepherd whose name was Joe decided enough was enough. So, Joe went to see the king. He loaded up his cart and set out. On the way he heard a strange noise, suddenly, he saw a fair??? Now that was strange! He decided to investigate it so off he went. Now, I think you’ll have remembered that Joe has completely forgotten about his family. Luckily, Joe had left them all of the food stores phew! So as Joe went to investigate the fair, a huge eagle swooped him and dropped him in its nest and made him feed her chicks. So, Joe is still there.

You fly, trailing seaweed like a veil. Escape winter snow and ice. A cruel landscape. The water swallows worry, doubt, each wave a caress, rinse the domestic and fill the space, calm, calm, in the mauve twilight you reach towards the depths and beckoning moonfish.

And she trawled the landscape of self, where winter had settled and sought rest. She was a strange kingdom she discovered, of evil beasts, and many moonfish that caught the light; or Jupiter even, the greatest planet of them all.

All started with indecision: tiredness and laziness were the main reasons to avoid an active and lively night. Positivity, thinking of entertaining the present moment, and living out my opportunities lead me to get ready after enjoying a tasty moonfish with seaweed for dinner. I had gone to the Circus Gallery before, but never during this special night of the year. A strange moment occurred on the second floor; I was going upstairs when I was all of a sudden transported back to the Kingdom of my origins. The music was a beast that stopped me, to stand there, unblinkingly. Classical Flamenco music was being played; it made me feel everything inside of me. A guitarist - unknown to me - was playing, and in that moment everything around me stopped. I only had ears and eyes for him and his music. Since that night I realised that it doesn’t matter where and when I am: what matters is enjoying every landscape I decide to take part in.

At twilight, the moonfish peaked out at the winter landscape. She saw a shepherd guarding his beasts. The shepherd, pausing for a rest, noticed a hawk swoop majestically down, gather a moonfish in her talons and fly away, into the cold winter night.

He paused to rest his beasts of burden hauling a cart of seaweed to the meadows field. In the winter twilight a grass big top. Nestled in the bowl of the old quarry. A hawk hovered in the distant landscape. Smoke rose from a domestic habitat. Time to move he said to himself. No moon fish in his load.

The winter shepherd rested his cart in the twilight. Then it appeared, as he had hoped, he realised. Moving its wings silently the hawk landed and allowed the shepherd to slip the baby onto its back.