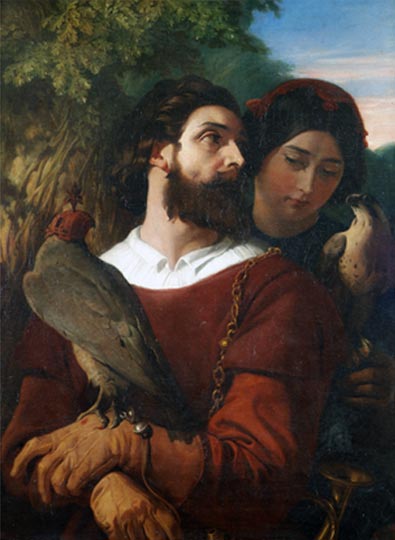 The Falconer 1853 Oil on canvas

The exhibition will opened on October 25th. 2008 and continued through to February 14th 2009. With over two hundred works, including oils on canvas, drawing and prints, on loan from institutions and collectors throughout Britain and Ireland, the Maclise exhibition will be the most important project organised by the Crawford Art Gallery in over three years.. The show will be accompanied by a catalogue, contributors to which include Prof John Turpin, who contributed to the 1972 Maclise exhibition at the Tate, Prof. Fintan Cullen of Nottingham University, Dr. Nancy Weston, whose biography of Daniel Maclise was published recently, and Prof. Tom Dunne, editor of the catalogue for the 2005 James Barry exhibition at the Crawford. There will also be a series of lectures and an education programme for schools. The exhibition and catalogue, will give a new insight into an artist famed in his day but whose florid and Romantic style fell out of favour in the 20th century.

Born in Sheares Street, Cork, the son of a discharged British soldier who had set up as a cobbler (or as a tailor) in Patrick Street, Daniel Maclise was, from an early age, an artist of precocious ability. After a short period working in Newenham´s bank, in 1819, when the Cork School of Art was established in the former Apollo Theatre, Maclise was one of the first students to enrol. He would have been thirteen years of age. The impetus for setting up the school came from the arrival in Cork of a set of sculpture casts from the Vatican Museum. Among them were some of the most important Graeco-Roman sculptures and Maclise made the most of this opportunity, demonstrating great skill in drawing from the antique.

A relatively impoverished art student, Maclise received support from a number of patrons, including the antiquarian Richard Sainthill and, later in London, the writer Crofton Croker. His quick facility and talent for catching a likeness were demonstrated in 1825, when Sir Walter Scott, on a visit to Cork, called in to Bolster´s Bookshop on Patrick Street, where Maclise made a portrait sketch of the celebrated writer. The demand for this sketch was such that Maclise, never slow to recognise an opportunity, made at least three versions. It is said that the portrait was lithographed, but the surviving versions all appear to be pencil on paper.

The success of the Scott sketch led to commissions for portrait drawings of members of leading families in Cork, and military officers stationed in the city. Maclise also toured through Kerry, Waterford and Cork, making drawings of picturesque river scenery, houses, abbeys and castles. In 1827, aged still just nineteen but already an established local artist, Maclise went to London, where the following year he enrolled as a student at the Royal Academy schools, where in 1831 he gained the Gold Medal for History Painting.

His paintings from this period are generally ambitious attempts to portray scenes from British and European history, such as the work in the National Gallery of Ireland, Charles I, King of England and his Children, before Oliver Cromwell. In 2007, the Crawford Art Gallery acquired, at Sothebys, the painting Francois I and Diane of Poitiers, painted in 1834, that depicts a scene from sixteenth century French history. Maclise also attempted Irish subject-matter, most notably in the painting that blends folk beliefs with literary portraiture, Snap Apple Night (1833) and more controversially in The Installation of Captain Rock, depicting outlaws and social unrest in rural Ireland.

Maclise´s history paintings were often inspired by literary works, such as the plays of Shakespeare, and in his work the distinction between illustration and fine art is blurred. He produced many illustrations for works of literature, such as Tom Moore´s Irish Melodies, the poems of Tennyson, and woodcuts for some of the ‘Christmas books´ of Charles Dickens, such as The Chimes, and The Cricket on the Hearth. Maclise´s style can perhaps be described as Neo-Gothick, in that while it is clearly indebted to Northern European realist tradition, there is also a strong vein of whimsy and the grotesque in the imagery he employs.

In London, most of Maclise´s friendships centred on the Tory periodical Fraser´s Magazine, for which he produced dozens of lithographed portraits of leading writers and politicians. However, the high point of his career was reached in the mid-1840´s, when he was commissioned to paint murals for the Houses of Parliament. One of these works, The Marraige of Strongbow and Aoife (1854) is now in the National Gallery of Ireland, but the two largest works, The Meeting of Wellington and Blücher (1861) and The Death of Nelson (1865) are in the Royal Gallery in the House of Lords. After the death of Prince Albert, who had revelled in the military detail of these paintings, Maclise discontinued his work in the Houses of Parliament. Although he strove for, and achieved, success, when offered the presidency of the Royal Academy, Maclise refused, and he refused also the offer of a knighthood.

It is anticipated that over 100,000 visitors will visit the exhibition.