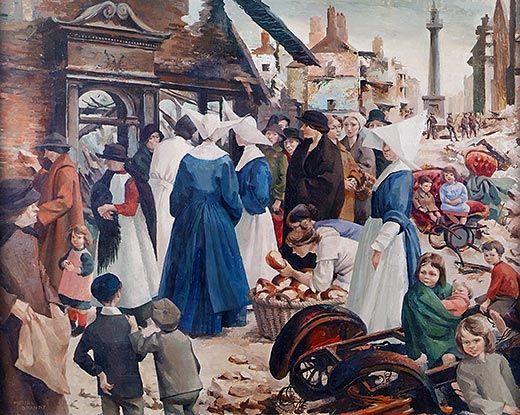 Curated by Dr Éimear O’Connor the exhibition will focus on several themes, both social and political, that effected Ireland between 1900 and 1916 including the First World War as seen through the eyes of Irish war artists Sir William Orpen and Sir John Lavery; the Cork International Exhibition (1902); artistic responses to the Easter Rising 1916; the cultural lives of Cork-born Terence McSwiney and Sir Hugh Lane; the consecration of the Honan Chapel (1915), the Cork International Exhibition (1902-03); and the rise of the Irish Agricultural Co-Operative Movement as espoused by Sir Horace Plunkett, Cork-born R.A. Anderson, and artist and cultural commentator, George Russell (AE).


The exhibition will include works from the Crawford Art Gallery collection and paintings, posters, film footage, photographs, and ephemera from public and private lenders in both Ireland and England. In addition, the Gallery hosted an extraordinary day on 21 November 2015 during which the people of Cork and surrounding areas were invited to bring their personal items of treasured history to the gallery, which will form a digitized display entitled the ‘The People’s History’.  It is our way of connecting the narrative of the exhibition with the personal narratives and histories of us, the people.

See a recent video of an RTE news report
on the exhibition here:
Major Irish art exhibition opens in Cork

Click here to view A Heart That is Free - Terence MacSwiney in Context, recorded on 17 June 2016 at Cork Opera House.