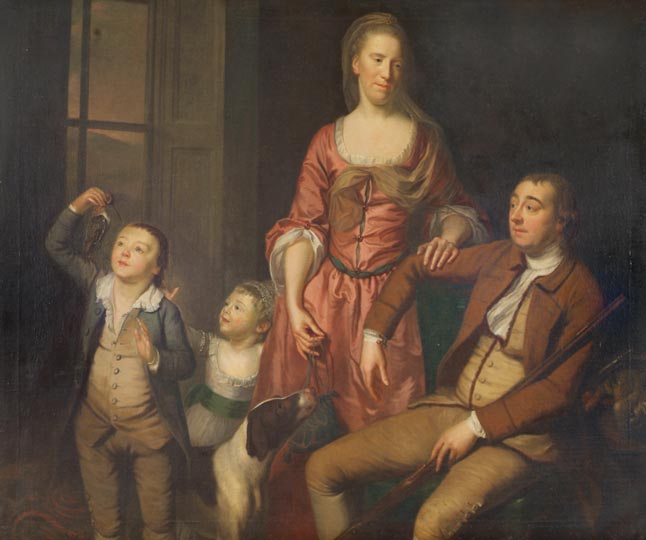 Eighteenth century Cork was a thriving port, with a recognisably Dutch appearance along its quays, shown in
The View of Cork by John Butts. This building, the then Custom House, can be identified in the centre, displaying
the Union Flag. Cork traded with the burgeoning British Empire, absorbing cosmopolitan influences and creating
many local fortunes, among them the Penroses of Woodhill.
Presenting for the first time a group portrait of the Penrose family, this room also highlights some of the gallery’s
eighteenth century works which happily have a Cork relevance, and thus surround the Penroses with a familiar
ambiance.

Cooper Penrose, a Quaker, was born in 1763 and after moving to Cork made a fortune from trading in timber.
After his marriage to Elizabeth Dennis, daughter of another Quaker timber merchant, Penrose’s business
prospered immensely and their home at Woodhill, high above the banks of the river Lee, near Lover’s Walk,
became so very magnificent that local Quakers became most uneasy - eventually ostracising the family.
The Penroses built up a renowned art collection, even commissioning a portrait of Cooper from Jacques-Louis
David in Paris. They also owned works by James Barry (1740-1806) - one of which The Prince of Wales in the
Guise of St. George, now hangs outside this room. It may justly be assumed that the Penroses bought a set of
Barry’s Adelphi prints, Barry’s talents having been nurtured by certain Cork Quakers, and the Penrose sons also
gave financial support to Barry’s estranged sister who remained here in Cork. Catholic Barry never lost his deep
admiration for this religious group, and the earlier version of his engraving - and the original painting in the
Royal Society of Arts, London - of the group of legislators in Elysium and Tartarus (see far wall) had William Penn
in the foreground, until he was later replaced by Lord Baltimore, to whom Barry gave the laurels for fostering
even greater religious tolerance in America than had the Quakers. The often irascible, headstrong Barry even
wrote to Penrose to explain this apparent volte-face, and such carefulness of another’s feelings says much about
the deeper nature of Barry, and the great affection he retained for Penrose.

The Woodhill gallery, as it was locally known, contained paintings by old masters as well as prominent
contemporary artists including Angelica Kaufmann (1741-1807), and local painters such as John Butts (c.1728-1765)
and Nathanial Grogan (1740-1807). Penrose’s sons later welcomed young Cork artists Daniel Maclise (1806-1870),
Samuel Forde (1805-1828), and John Hogan (1800-1858) to the house, where these eager students would copy the
best paintings - just as they copied, for the purposes of anatomical study, the very casts you see in the Sculpture
Gallery downstairs.

The inclusion of portraits of Dean Swift and his companion Stella, and those of Mr. and Mrs. Emmet may seem fanciful
by the criterion of any Woodhill connection, but they are used here allusively. The Emmets had a more famous son,
and in his case the Penrose connection is strong - and fascinating. Jonathan Swift deserves inclusion on the grounds of the likelihood his works having been read by Penrose - but also for mere whimsy, in that Swift does indeed have a Cork connection, even if fictional, in the fertile imagination of ‘Father Prout’.

N.B. In 1724, when this building was erected, it functioned as Cork’s Custom House. Clerks worked in this room
handling bills of lading and other documentation, looking our of the high windows onto the river swerving through
what is now Emmet Place