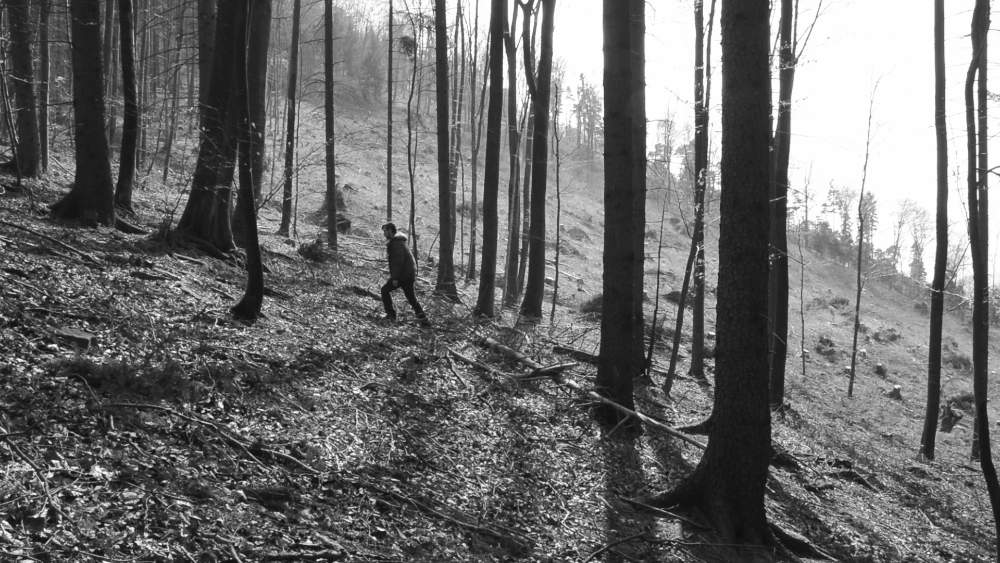 In Anca Benera and Arnold Estefan’s film No Shelter From The Storm two young people climb a mountainous terrain of destroyed forests, whistling the tune of Where Have All the Flowers Gone?, an anti-war protest song from the 1960s.

The video was shot in one of the last primeval forests in Europe, at the borderlands with Ukraine. This region on the Romanian-Ukrainian border is not only important for ecological reasons, but also politically, historically, and militarily significant.

Whistled against the backdrop of devastating mountainsides, the international anti-war melody becomes an appeal against military conflict, global exploitation, and environmental destruction.

The film was a commissioned work for the School of Kyiv Biennial (2015), created within the context of the political crisis around Crimea and the starting point of the armed conflict in the Donbas region.

Where are you from and how did you become interested in moving image work? Most of our works are rooted in the geopolitical context where we come from, Romania, historically situated at the peripheries of empires. Our first works were performances in which the camera was a witness. Since then, we often choose to work with moving images because of their time-based specifics and capacity to juxtapose multiple layers that create a single narrative.

What inspired/influenced you to make the work?

It was a commissioned work for the School of Kyiv Biennial in 2015, created within the context of the political crisis around Crimea and the starting point of the armed conflict in the Donbas region. The spark that incited the work was the history behind the anti-war song Where have all the flowers gone? In fact, the lyrics of this American tune originated in the Ukrainian Cossack folk song Koloda Duda, from the novel The Quiet Don, written by Mikhail Sholokhov. Another inspiring moment was the unexpected discovery of a collection of tree leaves from the Carpathian mountains, that Arnold's father had collected in the 1950s. Those trees no longer exist today, because the forests disappeared.

What are you working on at the moment?

We are doing research on the Black Sea, a zone that has always attracted economic attention and generated interest among both regional and non-regional forces. This is the place where one of the recent projects is situated. It will be a multichannel video installation that interconnects a number of distinct geographies and industries, from the Atlantic Ocean to the Black Sea, that share a common mineral: the diamond. The history of diamond mining is closely related to the colonial times of German South West Africa but those land resources in todays' Namibia, are slowly depleting, and the ocean became the next mining frontier. One of the first custom-made diamond recovery vessels is constructed in a Romanian shipyard at the Black Sea coast. In the film, the diamond comes to represent a symbolic frontier of human and technological relations to the landscape.

Anca Benera (*1977 in Constanta / Romania) and Arnold Estefan (*1978 in Targu-Secuiesc / Romania), are based in Vienna and Bucharest. Their work comprises installations, videos, and performances. The artist duo is interested in the structures hidden behind historical, social, and geopolitical narratives and the military and political impact on the environment.