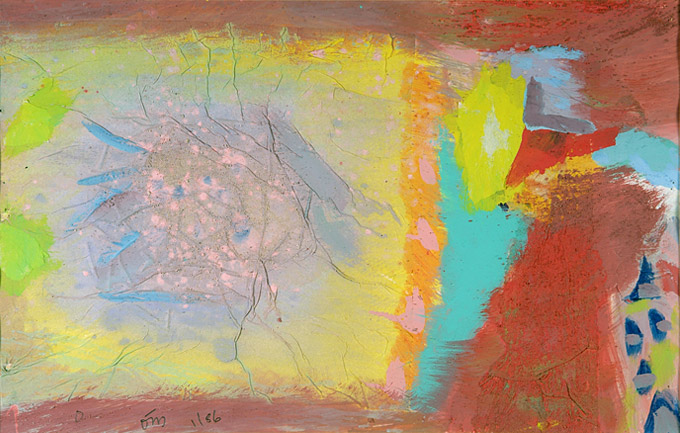 Tony O'Malley is one of the major figures in Irish contemporary art. He has exhibited widely since the 1950's in England, Ireland and Europe. This prestigious exhibition is co-curated by the Crawford Art Gallery and the Phillips collection, Washington where it exhibited at the Kennedy centre before returning to Cork.

The exhibition includes approximately thirty-five works spanning over forty years of O'Malley's career, and chronicles the evolution of his artistic style. His paintings represent a uniquely poetic expression in Irish art that is intimately personal and abstract. In his work, the visual description is secondary to his expression of the underlying experience of the places that he loves and paints including Ireland, Cornwall and later the Bahamas

O'Malley became a full-time painter in 1959, though not without considerable frustration at what he felt was an impenetrable wall of polite disregard towards his efforts in Ireland. Moving to Cornwall in 1960, O'Malley opened himself to an abstraction based on natural forms that had originated in Central Europe in the 1920's. In addition he found inspiration in the freedom of the international artist community of St. Ives where Hepworth, Heron, and Peter Lanyon had already established themselves. O'Malley's succes within this context lay in his ability to absorb almost intuitively the contrasting aesthetic strands of European and British art he encountered in Cornwall whilst remaining faithful to his own inner sense and purpose.

His work often holds a strong spiritual element which is illustrated by his works which he has painted annually on or around Good Friday. These works express his sense of struggle in the individual to achieve a form of redemption and the struggle of the artist. While O'Malley has moved towards abstraction he has always retained specific references to specific landscapes in his paintings.

In 1974, O'Malley's first visit to the Bahamas inspired a series of paintings (e.g. Bahamian Butterfly 1979) which are markedly different to the paintings inspired by Irish and Cornish landscapes; black is rarely used and he moves towards a more colourful palette from the more brooding earlier work.

Moving back to Ireland in 1990, Tony O'Malley still works every day unwilling to break the habits of a lifetime. His awareness of self continues to provide a wellspring of inspiration. Every painting is still a distillation of experience and place, where memory interweaves with the present moment.

In 1993, Tony O'Malley was conferred by President Mary Robinson with the Aosdana title of Saoi, an honour confined to only five living artists. He has also received the prestigious IMMA/Glen Dimplex Lifetime Achievement Award.