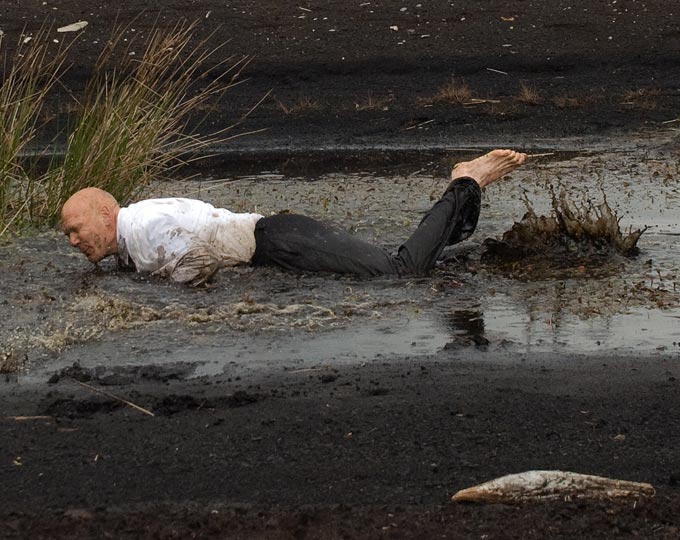 A Rocky Road is an exhibition investigating artistic production and its reception in Ireland.  With an emphasis on the social realities that cultural invention has encountered in the country, several topics repeatedly arise: conservative reactions and protest to the growth of modern art, vandalism of artworks, and the newsworthy character of artists with their many creative ideas and schemes are all prominent.

Through existing artworks, artifacts, and new commissions, the exhibition considers the underlying attitudes of what could be termed an ‘aesthetics of reception.’ Public response and the subsequent afterlife of an artwork are considered as themes of enquiry, as relevant as the creative intentions that bring the artwork into being.  Populist reaction to exhibits, media coverage and reactionary politics have often opposed various forms of artmaking in Ireland over the last forty years. By focusing on and gathering together a selection of these instances into a common heritage, they can be considered more than occasional oddities in the progress of history. Instead their presentation might be viewed as a recurring antagonism that evidences the challenges art has posed to the public realm and Irish society at large.

A series of photographs by Gerard Byrne document an empty space where an Irish Pavilion for the Venice Biennale was once proposed to be built. John Carson’s A Bottle of Stout in Every Bar in Buncrana presents an artistic effort to obtain sponsorship from the Guinness brewery to distribute a poster about the consumption of alcohol. A new video by Nigel Rolfe reacts to a newspaper report of the 1970s of his sculptures being attacked in County Wexford. An overview is presented of alterations to and public controversy surrounding Eilis O’Connell’s The Great Wall of Kinsale, the largest sculpture in Ireland and the UK in 1987. Danny McCarthy sprinkles chalkdust erased from a Joseph Beuys blackboard after his lecture in 1974 around the gallery spaces of the Crawford. A collection of archival material from national broadcaster RTE charts the development of the formats in which art is presented on TV. Other presentations include a print by David Lilburn and photos by Owen South, the Tau Cross of Kilnaboy, Tim Rollins and KOS with Charles Haughey, the Irish Daily Mirror newspaper and the opinions of Pierre Restany.