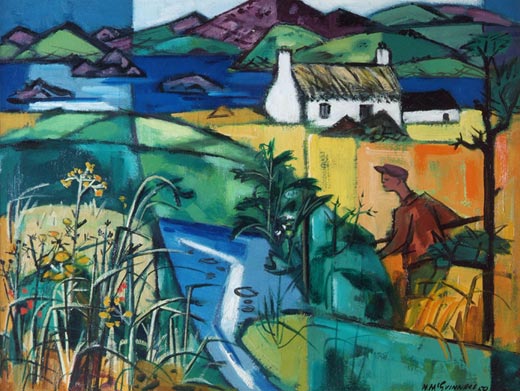 Nora McGuinness From the River to the Sea, 1959. Great Southern Collection

This exhibition takes its title from a painting by Daniel O’Neill, and features Irish paintings from the mid to late decades of the twentieth century, drawn from the Great Southern Collection, presented to the Crawford Art Gallery by the State in 2006.

Beginning in 1959, the collection was assembled by Ireland’s transport authority CIÉ - Córas Iompair Éireann. The collection was named after the chain of prestigious Great Southern hotels, in Killarney, Parknasilla, Kenmare, Sligo and other locations, that formed part of the CIÉ Group. Works of art continued to be acquired until the hotel group was transferred to new ownership in 2005.

The Collection is particularly strong in the work of Norah McGuinness, Daniel O’Neill and Gerard Dillon, while artists such as Camille Souter, Nano Reid, Arthur Armstrong and Patrick Collins are also represented.

The majority of paintings are figurative, with an emphasis on landscape, but there are also fine non-representational works, by Cecil King and Patrick Scott.