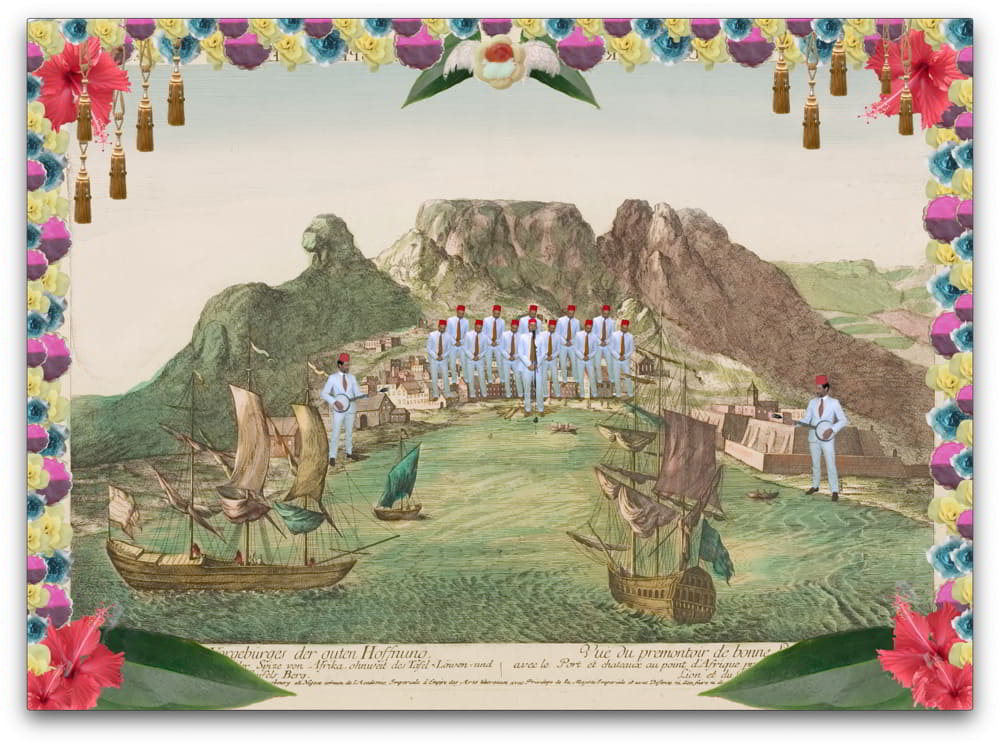 Thania Petersen grew up understanding the old Malay word kassaram to mean a “big mess” or things being ‘out of place’ or ‘upside down’.

She writes: ‘The mess begins when you realize that, as much as you can trace our ancestry from the Cape, South Africa to Indonesia, you can undoubtedly link us to many other countries and people from all over Africa, Asia, and Europe as well. The complexity of this story, however, does not form part of our cultural identity: we are simply described as ‘Cape Malays’ and have been deliberately Orientalized, erasing all of our African heritage and permanently cementing us as the Other. In a landscape built to mirror Europe but defiantly remaining “African,” to be “Malay” means to not belong. Too African to be Asian and too Asian to be African.

Thania Petersen is a multi-disciplinary artist who uses photography, performance, and installation to address the intricacies and complexities of her identity in contemporary South Africa. Petersen’s reference points sit largely in Islam and in creating awareness about its religious, cultural, and traditional practices. She attempts to unpack contemporary trends of Islamophobia through her analysis of the continuing impact of colonialism, European and American imperialism, and the increasing influence of right-wing ideologies. Threads in her work include the history of colonialist imperialism in Africa, Asia, and the Middle East, as well as the social and cultural impact of westernized consumer culture. Her work is also informed by her Cape Malay heritage and the practice of Sufi Islamic religious ceremonies.

Petersen studied at Central Saint Martin’s College of Art in London. In 2018, Petersen held her solo exhibition IQRA at WHATIFTHEWORLD, Cape Town. She has hosted additional solo exhibitions in 2016 at the AVA, Cape Town and in 2017 at the Everard Read Gallery, Cape Town. She has participated in numerous group exhibitions both locally and abroad, including Radical Love at the Ford Foundation, New York (2019) and Present Passing: South by Southeast at the Osage Art Foundation, Hong Kong (2019). Petersen was awarded the Thami Mnyele Residency in Amsterdam in 2019.