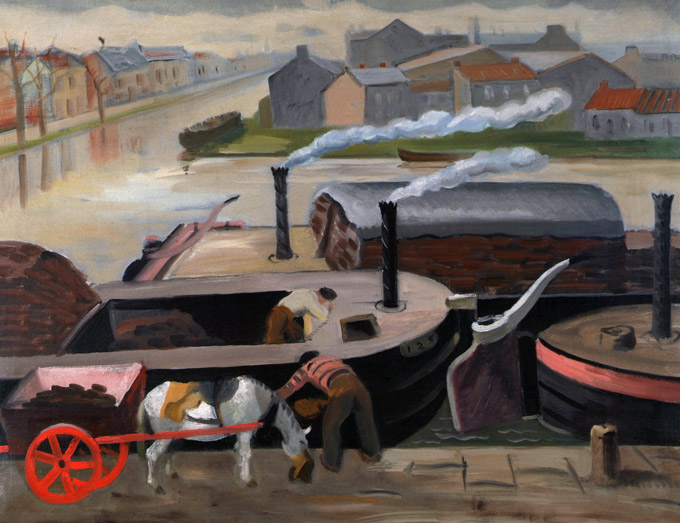 Realism and Modernism in Irish Art (1900-1990) highlights the best of the Crawford Art Gallery's permanent collection, bringing together works for the first time from three parts of the collection: The Gibson Fund acquisitions since the 1930's: the Fr. McGrath collection bequeathed in the 1990's, and the Great Southern Collection donated by the Minister for Arts, Sport and Tourism to the Crawford Art Gallery in 2006.

The exhibition reveals how the prevailing approach to Academic Realism was gradually challenged, in the 1920's and decades following, by the introduction of new ideas from Europe.

Whilst Modernism can be seen as defining the burgeoning industrialised countries in Europe and North America, the art that came to represent the new Irish Free State in the 1930's was essentially a form of Academic Realism which was rooted in the seventeenth century in the art of Velasquez and Murillo it was also influenced by French Realism, which sought to convey an objective vision of contemporary life. The Realist painters and sculptors, many of them graduates of the Dublin Metropolitan School and the Crawford School of Art in Cork - William Orpen, Sean Keating, James Sleator and Soirle MacAna - held sway as pillars of the art establishment in Ireland.

However, many Irish artists began to be influenced by Modernist principles, often directly from Europe and through scholarship funded by the State education system.  One of the main strands which influenced the roots of Modernism lie in Picasso’s and Braque’s Cubism – the fracturing of the image, the rejection of perspective and the emphasis of the two-dimensionality of the canvas.

Mainie Jellett, Evie Hone and Norah McGuinness who trained at the Dublin Metropolitan School, embraced Modernist principles, following their respective studies in Paris in the studio of Andre Lhote. Jellet and Hone also studied by with Cubist artist and theorist Albert Gleizes. They returned to Ireland inspired by these developments and became key influences in Ireland.

During the years of World War II, Ireland became a haven for progressive artists from Europe, and a surprisingly sophisticated art world developed. The White Stag Group founded in 1935, led by Basil Rákóczi and Kenneth Hall, encouraged a move from Academicism to Modernism, and their “Subjective Art” strongly influenced the work being made at the time by Irish artists such as Louis le Brocquy and Patrick Scott. The exhibitions of the White Stag Group inspired the establishment of the Irish Exhibition of Living Art in 1943 by Louis Le Brocquy, Norah McGuinness, Mainie Jellett and Jack Hanlon, amongst others which continued annually for over three decades.  The popularity of the IELA showed that there was a real enthusiasm amongst Irish art collectors for more radical trends. However, the version of Modernism they most appreciated was adapted to a more conservative aesthetic.

It has become routine to dismiss the visual arts of 1950's Ireland as being inward-looking, but in fact many talented artists were continuing to work quietly during these years, creating paintings and sculptures of real quality. When, in the 1960's, industrial progress did come to Ireland,  the visual arts reflected this economic up-turn with the emergence of movements such as Pop Art, Minimalism and performance art – notably by Robert Ballagh, Cecil King and Noel Sheridan respectively.

A downturn in the economy in the 1980's saw a resurgence of an expressive form of realism, exemplified in the work of Barrie Cooke, Rita Duffy and Brian Maguire, where raw painting perhaps conveyed a sense of anger at the return of high unemployment and emigration.

The visual arts in Ireland today continues to reflect simultaneously an inward and outward gaze, absorbing influences from abroad but also creating compelling art that reflects the concerns and dynamics of contemporary Irish society. One of the questions posed by this exhibition is: which of the variety of contemporary art forms employed by Irish artists will be held in the future to embody the spirit of the present day, in the same way as Patrick Scott expresses clearly the optimism of economic and social development of the 1960's, or a generation earlier, that Norah McGuinness and John O’Leary had cleverly adapted the raw lessons of Cubism to a realist tradition, creating an art that was progressive but also acceptable to a conservative and insular art audience.