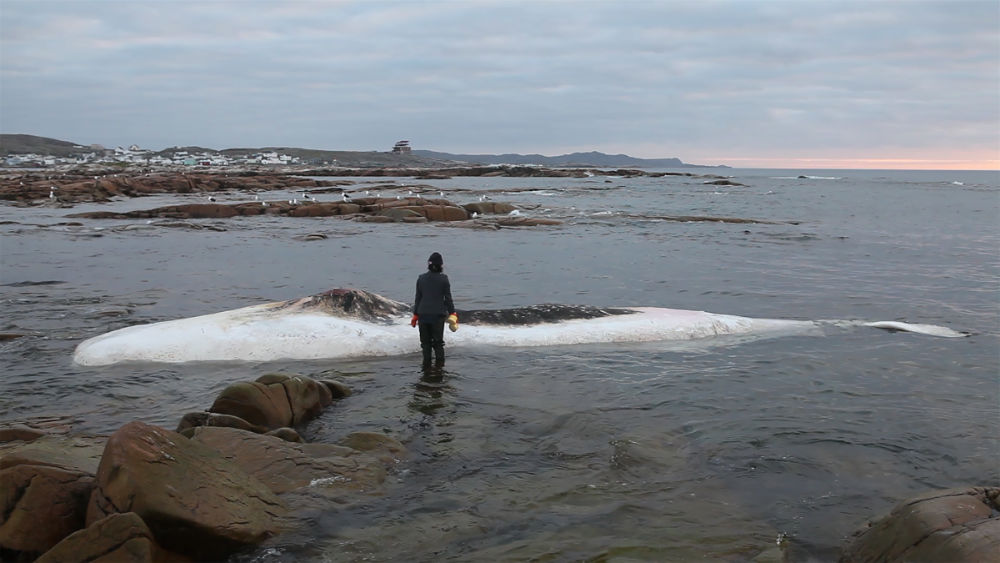 Patty Chang’s Invocation for a Wandering Lake: Part 1 & 2 (2016) calls for contemplation of human and non-human lives, the natural environment, and destructive governing forces, as we witness the artist in ritual acts of care and mourning.

The lifeless body of a whale floats off the coast of Newfoundland’s Fogo Islands, a former fishing hub. The artist Patty Chang is seen meditatively washing the deceased animal. With similar attention, she scrubs the shell of an abandoned ship in the desert of Muynak, Uzbekistan, a defunct seaport on the receded Aral Sea. These repetitive acts seem almost absurd and unnecessary, as these entities could never return to life. Nevertheless, she continues to perform rituals of care, perhaps as a way to process their fateful ends. Over the last year, we collectively experienced extreme loss due to the ongoing pandemic. If we are to create new ways of living, perhaps we first need to practice ways of mourning, mending, and contemplating through rituals of care, as the film suggests.

Where are you from and how did you become interested in moving image work?
I was born in California, United States. I began by working in live performance and when I had access to video cameras, I started using video.

What inspired/influenced you to make the work?
When I was in Newfoundland, I heard there was a beached whale not far from where I was staying. When I saw the whale corpse in the water, I felt very overwhelmed by sadness. I felt that I needed to do something about it and decided I wanted to wash the whale’s body. I bought a sponge and waders at the local department store and went into the cold water to try and wash it. A few years later when I was working near the Aral Sea in Uzbekistan, I saw a fishing boat moored in the sand. The sea had shrunk and the boat was in the desert. I felt a similar feeling of loss for the boat and the past and decided to wash it as well.

What are you working on at the moment?
I have been installing a 5-channel video installation at Pioneer Works in Brooklyn NY called Milk Debt which is a multi-part video project consisting of videos of lactating women pumping their breast milk as they recite lists of fears drawn from multiple communities across different geographical regions. I am also working on a collaborative project thinking about endings and climate change by thinking about necropsy with Astrida and Aleksija Neimanis.