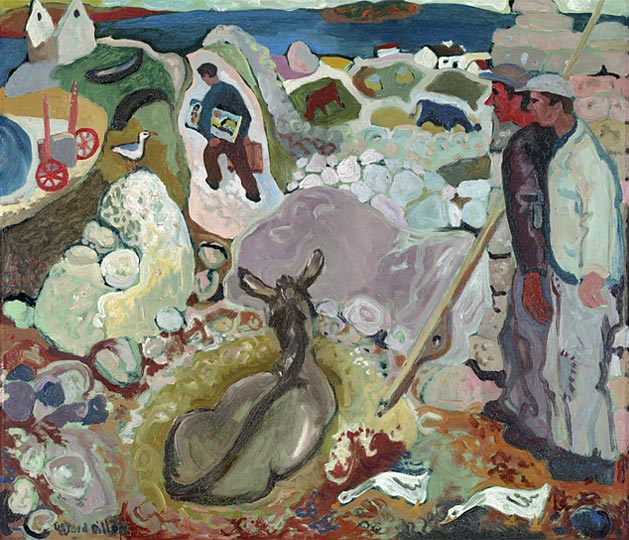 A personal choice by Alannah Hopkin, writer and critic.

Outsider Art - art created outside the mainstream of the contemporary art scene - has gained increasing recognition internationally in the past thirty years. It is an exciting new area, in which the terms are still being debated and defined.

Increasingly, the term Outsider Art is used as an umbrella term incorporating various forms of non-mainstream art, including naive and self-taught painters, folk art, graffiti art, art produced by psychiatric patients and by visionaries, and three-dimensional built or decorated environments.

The exhibition is Alannah Hopkin´s personal selection of paintings by Tory Island painter Patsy Dan Rogers, Robert Matthews who took to painting his local environment late in life, Michael Sheehan of Allihies, Paddy Gray of Kinsale, and Finola Leane of Listowel, Co. Limerick who has painted local scenes and childhood memories with exceptional verve all her long life. Works by Tom Walsh of Ballinacurra, Co. Cork by Bill Griffin, previously an oil-rig contractor, who started painting soon after his fiftieth birthday, and has never stopped, John Kingerlee, who works in isolation in his cottage near Eyeries, produces work that combines great sophistication with direct expressiveness, John the Painter of Cork and John Bourke of Limerick are also featured in the exhibition.

The works exhibited are, by and large, cheerful, celebratory works, that speak directly to the viewer, pleasing to look at in the way that children's art can be pleasing. You do not need any specialist knowledge to appreciate the appeal of this work, and yet the exhibition does contain adult assessments of the passing of time, and records changing ways of life, changes in local topography, and changing iconography.