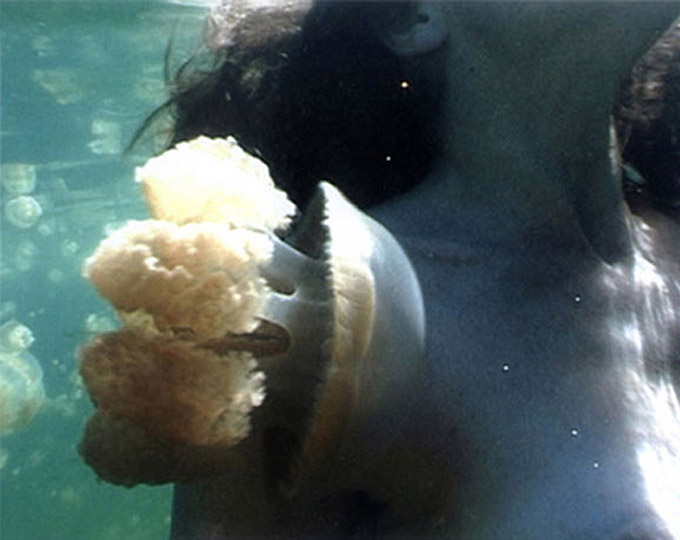 Jellyfish Lake is a film by Dorothy Cross resulting from investigations into the biomechanics of Chironex fleckeri, the jellyfish. Filmed in an isolated lake, estimated to be 12,000 years old, in Palau, Micronesia, millions of golden jellyfish migrate across the lake daily.

Cross plunges the viewer under water to view a naked woman floating beneath the sunlit surface. Hair drifting and pulsating like the multiple golden jellyfish around her pale-skinned body, it echoes the hypnotic rhythms of the jellyfish.

Unlike the solid form of the body, the contrasting golden jellyfish are amorphous and transparent yet there is mutual awareness: the human form is laid bare to nature‘s defences but collide temporarily. The body displaces the sentient primitive jellyfish but they brush by it making their presence felt both physically and visually. The jellyfish merely investigate, along with our gaze.

Jellyfish Lake is part of Cross’s ongoing investigations to reposition man in nature and to reflect on the role for artists within a world facing increasing environmental and cultural changes.