Crawford Art Gallery is currently closed due to national restrictions

DANNY McCARTHY Beyond Silence: A Bell Rings in an Empty Sky 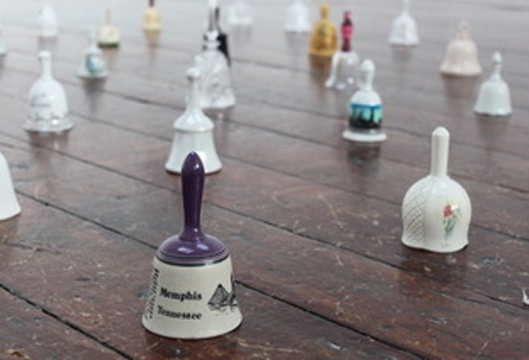 Multiple ceramic bells and mesmeric static musical figurines installed in the Crawford Art Gallery prompt the viewer to pause a while. The work allows a moment, for the imagination to grow with the sounds prompted by the visual spectacle.

McCarthy’s practice has long concerned itself with promoting the simple of idea of listening. In a departure from creating sound, for this exhibition, McCarthy foregrounds our daily, ever present background soundscape.

The Artist brings together over 500 found ceramic objects, which have been either muted by the artist or by their material restrictions. McCarthy is a gatherer and scours car boot sales and second hand shops to find discarded objects that have been overlooked and under used.

Beyond Silence playfully triggers memories to create potential imaginary mindscapes. The installations are accompanied by drawings created by the artist during a recent residency at the prestigious Rauschenberg Foundation in Florida. McCarthy immersed himself in the legacy of Robert Rauschenberg’s practise, which led to his use of erasure as a tool of engagement in the drawings and further engaged with his interest in listening.

Danny McCarthy is one of Ireland’s pioneers of performance art and sound art and he continues to be a leading exponent exhibiting and performing both in Ireland and abroad. McCarthy is also gatherer and scours car boot sales and second hand shops to find discarded objects that have been overlooked and under used.

McCarthy’s is also interested in acoustic ecology and collates ‘lost sounds’ - evident in his Found Sound (Lost at Sea) at Crawford Art Gallery (2011-2016) and his work Mutus Liber focuses his concern for lost sonic soundscapes.

McCarthy asked Hubert Bookbinding to create a handcrafted book containing found perforated music paper.  The music paper, that would have been ubiquitous a century ago, was at the forefront of popular culture when many fairground and cinematic attractions would feature pianolas (a self-playing piano). McCarthy captures the now muted sounds in archival form perhaps in the hope that the next generation may find a willingness to listen and explore sounds from history.

The publication is published by Farpoint Recordings priced €20.