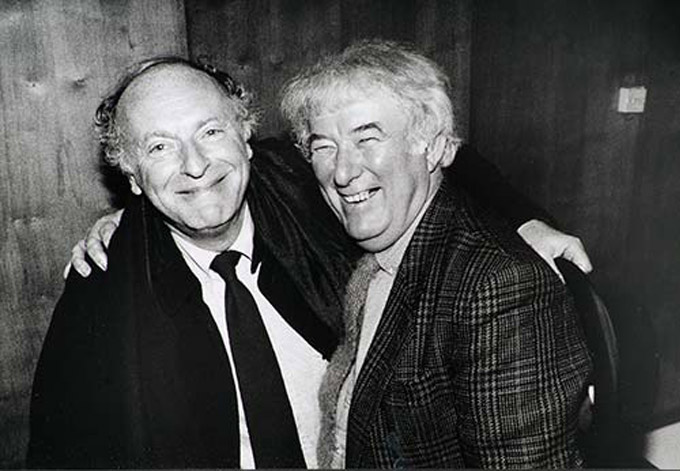 An exhibition celebrating the extraordinary range and talent of Irish writers from the eighteenth century to the present day, opens at the Crawford Art Gallery Cork on Friday 6 March 2009. The exhibition presents over 60 works drawn from the collections of the Crawford Gallery, The Abbey Theatre and The Arts Council.

The title of the exhibition is inspired by Joseph Campbell´s seminal work “The Hero of a Thousand Faces”, and suggests that while each writer is a unique and distinct personality and talent, when taken collectively, their contribution to the identification of Ireland as a country of intense literary activity has been profound. In its broader sense, the phrase also alludes to the Jungian concept of universal archetypes, and to that subconscious wellspring which is the greatest inspiration of the writer, as an observer, a commentator and indeed a shaper of society.

The title is also a wry reference to Patrick Kavanagh´s famous remark, made in the 1950s, that “of the legion of poets in Ireland there are never less than ten thousand”, an assessment mixing in equal measure pessimism and optimism, and which, even allowing for poetic licence, illustrates the impossibility of an exhibition of portraits of Irish writers ever being considered in any way complete, or all encompassing. Nonetheless, good progress is being made, as can be seen from the works that will be shown.

The recent acquisition by the Crawford Art Gallery of Edward McGuire´s Portrait of Anthony Cronin (1972) represents a significant addition to a developing collection of portraits of Irish writers both commissioned and acquired by the Crawford. Cronin follows Jonathan Swift, whose 1735 portrait by Francis Bindon was acquired by the Crawford Gallery in 2007 to mark its accession to the status of National Cultural Institution. Portraits of writers commissioned by the Gallery include Conal Creedon by Eileen Healy (2006), Micheal O´Shiadhail by Michael O´Dea (2005) and Aidan Higgins (2003) by Suzy O´Mullane.

Other notable writers represented include Edmund Burke in James Barry´s painting ‘Burke and Barry in the Characters of Ulysses and Companions fleeing from the Cave of Polyphemus; Elizabeth Bowen by Patrick Hennessy, and three portraits, James Joyce, Samuel Beckett, and W. B. Yeats, by Louis le Brocquy. Frank O´Connor is represented by an early work by Norah McGuinness. The recently garlanded writer Sebastian Barry is shown in a 1991 study by John Minihan, a photographer well known for insightful portraits of Irish writers, most notably Samuel Beckett, but also Nuala Ni Dhomhnaill, Mannix Flynn, Eilean Ni Chuilleanain, Seamus Heaney, Patrick Galvin, and John McGahern.

The outstanding portraits being loaned for this exhibition by the Abbey Theatre include Gerald Festus Kelly's Portrait of Lady Gregory, Sean O'Sullivan's Portrait of W. B. Yeats, and Carey Clarke's Portrait of Tom Murphy. These are iconic images of Ireland´s literary revival and also of the finest of present day writers. The portrait of Hugh Leonard from the Abbey Collection had been intended to travel to the Crawford, but on the news of the writer´s death, has been kept on exhibition in the Abbey Theatre, as a mark of respect. From the Arts Council Collection, the portraits on loan to this exhibition include writers Conor Fallon´s studies of his father, the poet Padraic Fallon, a Portrait of Francis Stuart by Jack Crabtree and James Joyce´s Tie by Michael Farrell.

The Crawford´s collection of portraits of Irish writers is developing, but it remains far from complete. Many notable writers remain unrepresented, not least Laurence Sterne, Lady Morgan, Mary Lavin, Benedict Kiely and John B. Keane. Nevertheless, the formation of the collection over the past two decades does provides a template for the further development of an important aspect of the national art collections of Ireland in future years, particularly when seen in the light of existing portrait collections such as those at the Abbey Theatre, the Arts Council, and also the National Gallery of Ireland. The Ulster Museum collection also includes fine portraits of writers, not least Seamus Heaney and Michael Longley.