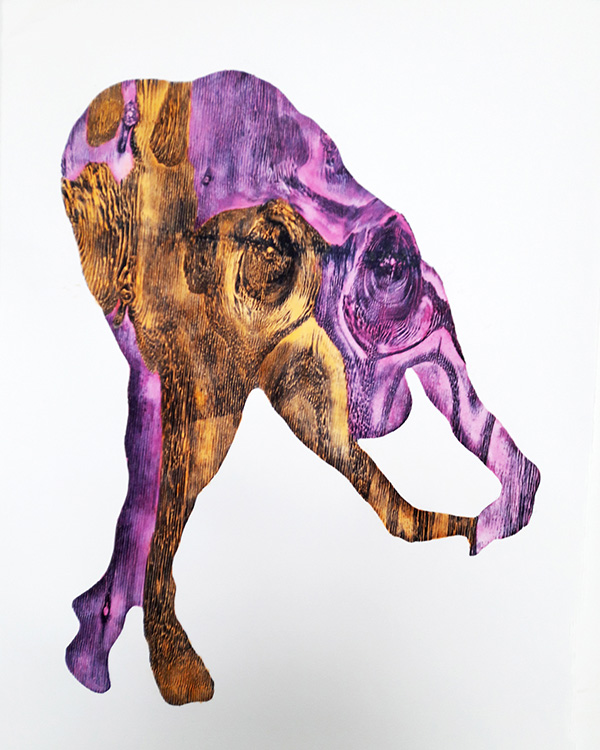 Vox Materia comprises a multi-part installation of sculpture and works on paper. Stemming from Maher’s consideration of a 12th Century mermaid carving, this show meditates on voice and silence. The mermaid is a hybrid creature that transgresses boundaries between human and animal, and is often associated with traumatic loss of voice.

Maher deploys the mermaid not as a motif, but as an ambiguous and powerful conceptual tool to explore ideas of language, embodiment, agency, and autonomy.

The artist begins by adopting and documenting contorted postures; creating strained silhouettes that gesture towards a language of the body in extremis. Vox Materiaexploits the tactile, contingent qualities of woodcut and watercolour to articulate amoebic, inter-elementary forms while hand-held sculptural forms create new material and corporeal vocabularies

This new work is presented alongside Cassandra’s Necklace (2012), Maher’s first live-action film, in which the mythical protagonist wanders an arid, glittering landscape in search of her voice, literally a necklace of unspeaking tongues.

Both bodies of work demonstrate Maher’s ongoing exploration of the burdens of silence and silencing in her recent practice.

Vox Materia was commissioned by The Source Arts Centre, Thurles, with support from Creative Ireland and Tipperary County Council.