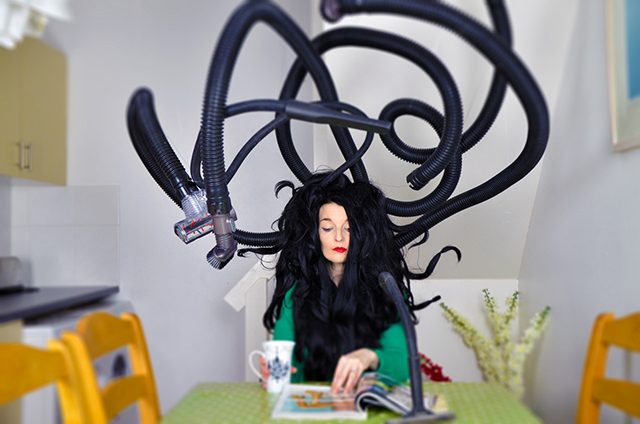 Seduced by the concept of the ideal home-maker and the working woman as proposed by the media, Aideen Barry’s stop-motion film, Not to be Known, shows the artist overwhelmed by the monotony and magnitude of domestic chores in nightmarish scenarios. To maintain the tension between reality and aspiration, the artist’s Medusa-like hair of vacuum cleaner hoses prepares and cooks the perfect family meal, irons the laundry, whilst she ‘keeps up appearances’, sitting quietly at the kitchen table, sipping tea, and scrolling through visual images of the ‘dream’ kitchen – i.e. spotless and non-functioning – on her Smartphone. The hair becomes so busy that it demands Barry’s body and drags her upstairs to make the bed, suggesting that adherence to her chores is a far greater need than maintaining an apparent quality of life. Finally, she chops off her vacuum tentacles in an effort to find her life outside the domestic space.

Barry’s performances are often physically and mentally demanding mirroring similar pressures on the female body which are exerted by our society. The dark humoured, uncanny film expands upon her interests in monachopsis – the subtle but persistent feeling of being out of place - and her exploration of obsessional behaviour in the context of suburban normality.

Not to Be Known was commissioned by the Arts & Heritage Trust, UK.

Aideen Barry (*Cork, 1979) has a national and international profile.  Her means of expression are interchangeable and incorporates performance, film, animation, drawing and sculptural forms. Projects include a solo show at MARFA Contemporary, Texas (2018); The Lexicon Commission Award (2017); By Association – A Performative Response to Carol Rama, Commissioned by the Irish Museum of Modern Art and Lismore Castle Arts (2016); and Brittlefield: A Solo Survey, RHA Gallery, Dublin (2016).